Life after death (of neurons) 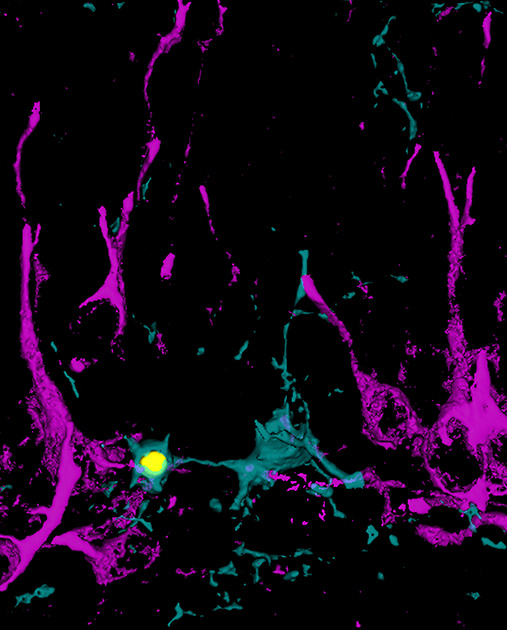 Neural death, which we generally associate with brain aging and neurodegenerative diseases, also affects young neurons. Newborn neurons die frequently during brain development on a scheduled basis, controlled by a cell suicide mechanism called "apoptosis." To avoid becoming a graveyard, the brain has a very effective mechanism for the removal of dead bodies: microglia cells. The microglia, discovered 100 years ago by Pío del Río Hortega, is responsible for "eating" dead cells through the process of "phagocytosis."

However, phagocytosis is not simply the passive removal of waste to prevent damage to the surrounding neurons. As evidenced by an international study led by Jorge Valero and Amanda Sierra, from Achúcarro - The Basque Center for Neuroscience, the Ikerbasque Foundation, and the University of Basque Country UPV/EHU. On the contrary, phagocytosis of dead neurons is an active process that directly affects the health and function of surviving neurons. In the same way that after the death of a zebra in the savannah, the vultures and other scavengers remove the corpse, and their depositions serve to nourish the soil and grow plants that feed other zebras, the microglia also closes the life cycle of the neurons.

To study this process, the researchers focused on the production of new neurons or neurogenesis, which occurs in an area of ​​the adult brain that is very important for memory and learning processes, the hippocampus. In this region, most of the newborn neurons commit suicide within a few days after birth, and are immediately encompassed and eliminated by microglia. The first clue that the phagocytosis process actively participated in the regulation of neurogenesis was obtained by the researcher from the Iñaki Paris group, who used different genetic models of phagocytosis blockade provided by collaborators of the Salk Institute in California and the Institute of Experimental Medicine of Budapest. In these mice, the reduction of phagocytosis of apoptotic cells was accompanied by changes in the production of new neurons, suggesting the existence of some type of communication signal between the phagocytic microglia and the newborn cells.

The response to this hypothesis was obtained by the researcher of the Irune Díaz-Aparicio group. Using a culture model in which the microglia was "fed" with apoptotic cells, she observed that far from being a passive waste removal process, the phagocytosis was actually an extraordinarily active process that altered microglia at all levels, from genetic to metabolic. Part of these changes involved the secretoma, which is the set of molecules secreted or released by the phagocytic microglia, and that contained signals that instructed the newborn cells to continue dividing or differentiating into neurons. This secretoma was the signal between phagocytic microglia and newborn cells in the hippocampus, and is therefore responsible for closing the life cycle of neurons.

Thus, the researchers propose that the microglia acts as a death sensor. When the microglia detects a lot of death from newborn cells, it indicates to the neuron production system that too many surpluses are being generated and production must stop. On the contrary, when it detects little death, the hippocampus could admit more new neurons and the brake has to be removed. Therefore, the main conclusion of this study is that phagocytic microglia help to slow down the production of new neurons through their secrecy contributing to the balance between life and death.

These studies have important implications for our understanding of how the brain defends against neuronal death in aging and neurodegenerative diseases, such as Alzheimer's disease, Parkinson's disease, cerebral infarction or epilepsy. In these diseases, potentiating phagocytosis can be a new neuroprotective strategy, not only to accelerate the cleaning of the tissue from the remains of dead cells, but also so that the secrecy of the microglia contributes to regenerate the damaged tissue.