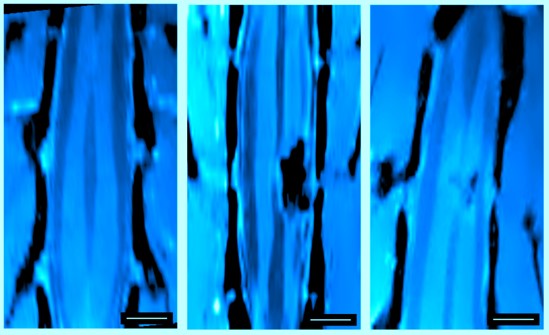 Research conducted by two groups at the Center for Cooperative Research in Biomaterials CIC biomaGUNE and one at SISSA, Scuola Internazionale Superiore di Studi Avanzati (Italy), showed that functional materials based on carbon nanotubes offer a possible means for facilitating the reconnecting of neuronal networks damaged as a result of spinal cord injuries. The study, published by the prestigious scientific journal PNAS (Proceedings of the National Academy of Sciences of the U.S.A.), constitutes a huge step forward in research geared towards recovery from injuries of this type.

The research groups led by Ikerbasque Professor and Axa Chair at CIC biomaGUNE Maurizio Prato, who is a worldwide reference in carbon-based nanomaterials, and the one led by Professor Laura Ballerini at SISSA in Trieste (Italy) have huge research experience in the field of applying nanotechnology and nanomaterials to repair neural injuries. Collaboration between the groups has shown over and over again that biomaterials based on carbon nanotubes facilitate communication between neurons, neuronal growth and the establishing of connections by means of materials of this type. “The electrical and mechanical properties of this material enable many applications unthinkable for any other materials. In particular, the interaction of excitable cells, such as nerve and heart cells, make carbon nanotubes of great relevance. Not only the communication among cells increases when interfaced with carbon nanotubes, but also it is possible to construct mechanically stable scaffolds that sustain nerve growth,” states Professor Prato.

“The groups of Prato and Ballerini had previously demonstrated the formation of neuronal connections in in vitro systems, in cell cultures. However, what still remained was the leap to an in vivo animal model of spinal cord lesion, the possibility of seeing whether the communications between individual neurons in fact also took place on the level of complete neuronal fibers in an in vivo model, and whether functional results were being achieved,” explained Pedro Ramos, the Ikerbasque Professor at CIC biomaGUNE, leader of the Magnetic Resonance Imaging Unit and the third key player in the research.

In this latest breakthrough the researchers managed “to demonstrate that in a set of animals with partial cutting of the spinal cord the reconnecting of fibers is in fact gradually established by means of the inserted implant, a kind of sponge of carbon nanotubes comprising interwoven fibers. The nerves reconnect in the area where they had been damaged and, what is more, the animals regained functionality, above all in the hind legs, the most affected by the lesion. It was also demonstrated that the material is biocompatible, in other words, no immune reaction was detected," said Pedro Ramos. In the Ikerbasque professor’s view, this significant breakthrough constitutes, “a hope going forward in terms of furthering recovery from spinal cord injuries of this type, of the optic nerve, or even from some kind of traumatic injury in which neuronal connection has been lost and the mobility of a limb is affected”. But he warned that "it does not mean that we can be repairing spinal cord injuries in one or two years’ time".

A goal on the horizon

As Ramos explained, the research was conducted “under highly controlled conditions just like any lab study”, and it is necessary to progress: “There are many aspects where work needs to be pursued in terms of the material, the conditions under which the material is implanted, the conditions under which the material has to work, etc..” For example, it is crucial to thoroughly explore the micro-structural and mechanical properties of the material, or the properties that facilitate neuronal connection, thus preventing possible side effects or even the rejection of the material itself (rigidity, elasticity, sponginess, compactness, size of the pores that remain between the fibers, etc.). It is also essential to go on furthering the production methods so that they are as stable and reproducible as possible, and so that components, such as growth factors or other substances that facilitate neuronal communication, can be inserted into its structure.

Furthermore, one would need to study the conditions that would allow one to move on to implanting the materials: “It is important to see how and when they should be implanted. In the study we inserted the implant during an acute lesion phase, so we did not have to contend with the existence of a glial scar, etc.” In addition, “one would have to see whether these results are confirmed in other animal models with less neuronal plasticity”. One of the main aspects of this reconnection process is “to find out whether the same connections existing before the lesion are restored or whether neuronal plasticity takes place, in other words, whether new connections that did not exist previously are established and the nervous system seeks another way of reconnecting to adapt to the new situation”. In this respect, in terms of imaging, “we are making progress in the development of functional imaging techniques that enable us to see the connections between the brain and the peripheral nervous system from a functional point of view”, he added.

Despite being pleased about the promising step forward achieved in the research, the CIC biomaGUNE researcher urges caution and points out that “we are far from being able to transfer this to humans. It displays all the features of being transferrable, it has been demonstrated to work, to be effective and not to lead to any adverse reactions in animal models. Work remains to be done to achieve the goal, but we are heading in the right direction”.